skip to main | skip to sidebar

We're onto Twice In A Lifetime!

We've got a new boat and a new blog (and a new kid!). Catch up at Twice In A Lifetime. 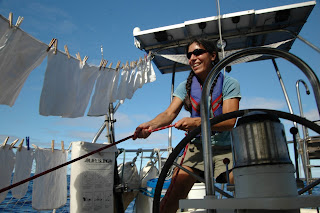 hell yeah! cloth diapers rule, we use them as well and we re not even floating... good luck with your preparations guys! love from holland, paul anne lali

Wow! That is exactly the sort of information I was looking for. Thank you so much for so generously sharing all of the details of cloth diapering while cruising. Even though we use pocket cloth diapers now, we have a whole stash of hand-me-down prefolds that we will probably bring on our Alaska cruise this summer thanks to your advice. Thanks for taking the time to share this information with us, I know it can't be easy to find time with 2 kiddos and a new boat!!

Where did you get the hemp liners? All I've been able to find with some google searching are liners made of viscose, or of paper fiber mixed with viscose.

Thanks again, this is EXTREMELY helpful!

Hi Jessica, Glad you liked the info about cloth diapers. You will have to let me know how it goes for you with two times the fun! I ordered liners from www.cottonbabies.com Best wishes, Alisa

My mum was a merchant navy wife and both my brother and I travelled on th cargo ships with them from birth...needless to say cloth was the only option. Sea water washing and see air and sun drying was brilliant. I'm. Now a mum of two small boys and cloth happier them both :)

Excellent post. This is the only info I've found for cloth diapering at sea. Thanks!

On June 23rd, 2007, we left our home in Kodiak, Alaska on board Pelagic, our 25 year old Crealock 37 sailboat. Our ten month old son was with us, and the ruins of our old life smoked in the distance as we sailed away: two good jobs, quit; fanstastic house, sold; most possessions, disposed of.

Three years later, we've made the transition from family of three to family of four. Pelagic is for sale in Tasmania, and we've just bought a new boat in San Francisco, a boat that we hope will carry us wherever we want to go for years to come.